A couple of weeks ago we started a series on how you might implement some of the more notable design effects in iOS 7 using purely web technologies. In the meantime, it’s been noted elsewhere that this may be difficult and perhaps impossible to do. I’m here today to tell you otherwise! Well, at the least the impossible part.

Today we are going to look at one of the features that got some attention, the use of parallax on the homescreen to create a sense of depth This is one of the words that Apple used to describe their new, supposedly “flat” design.

If you’ve not seen this in action, Gizmodo took Apple’s video and made an animated GIF version, which you can see below.

It got me thinking, how did they do that? How easy would it be to replicate using web technologies?

Before we jump in and build it, you can take a look at the finished product on a smartphone, or emulated in your browser to get a sense of what we’re going to be doing.

We’ve all seen parallax effects before. They’re a staple of 2D, and “2.5D” games, to add the perception of distance between objects. For the last couple of years we’ve also seen the use, and abuse, of parallax and scrolling in web page design.

So, what is going on to create what appears at a glance to be a 3rd dimension? Well I’ll let you in on a little secret that anyone who has installed the iOS 7 beta will have already noticed. The effect is particularly impressive when viewing a 2D rendering (such as a video) of the effect. When you see the same effect on a device, and then watch a video of the effect on the device, I think you’ll find the video more compelling.

Documentary film makers, who often have only photographs or paintings to use as their primary visual material, commonly make use of this to trick our eyes into seeing a 3rd dimension. It’s called “the Kid Stays in the Picture” effect. It tricks our brain that we are looking at a 3D scene, by using different relative motions.

In the iOS 7 homescreen situation, we have two levels of depth. The surface of the screen, and the background image. If you pay attention to the animated version, you’ll see that the icons don’t move relative to the surface of the screen. The effect is created purely by moving the background image relative to the icons. Notice how as we tilt the phone from right to left (on the screen) the background image moves toward the right, and as the phone tilts from left to right, the image moves back to the left. Why does this create a sense of depth? For the moment, to keep things simple let’s just worry about rotation around a line running from the top to the bottom of the screen through its middle as the device is facing toward us. That is, when we tilte the phone left and right.

Imagine we were looking down on the scene from above

The vertical arrow is the line of sight. Now, let’s rotate the phone to the left

I cheated a bit here, to make the maths a little bit simpler, but the idea is more or less the same. Instead of the device rotating, I’ve moved the observer, but their line of site is still the same – directly between the two icons in the middle of the screen. So, the icons don’t appear to move relative to the screen, but the background figures do. But just how far are the figures apparently shifted?

OK, so if your high school maths is a little rusty (don’t worry, I have a degree in mathematics and I had to look this up!) here’s what we have.

And we have enough information to calculate o, should we know the length of a, using our high school trig

We know θ, it’s the angle we’ve rotated the screen (and we’ll see in a moment how we’ll use the deviceOrientation event to get this angle as it changes). But how do we know a? Well, here’s the cool part, we just make it up. The larger the value of a, the further ‘away’ the background figures will appear to be (so the larger o will be.) In particular what this means is the relative movement of the background figures behind the icons is not linear, but goes something like this, where the background is 50px away

Note how the movement left or right increases dramatically as we get closer to θ = 90 degrees. Of course it can never be 90 degrees.

In short, the more we rotate the device, the more the background image appears to move.

So, now we have a basic model for how parallax works, how can we use this to emulate the parallax effect? Here’s my idea

There are other ways we could do this, with their own advantages. We could have the background as a separate img element, then use CSS3 translate3D to move this element to the left and right. This would have the advantage of enabling the device’s GPU to take care of moving the background. But we’ll stick to background-position, as it’s the simplest approach.

So, here’s our basic HTML

and some very basic style

Yes, not particularly interesting, yet. Now let’s think about moving the background image.

So we’ll need to make sure that our image is wider than our element, and positioned not in the top left hand corner. We could use the CSS3 property background-size to achieve the first, but we need to be careful. Suppose we decided to make the width of any background image 150% the width of the element. We’d use background-size: 150% to do this, but this then scales the height of the element to maintain the image’s proportions. For an image that is inherently narrower than the element’s current size, then the height will increase. But if the image is inherently wider than 150% of the width of the element in pixels, then the height of the image will decrease, and we may end up with this situation.

Better to have an image that will in all likelihood be taller and wider than the element’s width and height (yes, in a responsive world, this will present its own challenges).

The second part is a bit more straightforward. Surely, we’ll just use background-position: center? Sadly, not quite so simple. Because we’ll be changing the background-position to achieve the effect. So, what we do is position the background image using JavaScript and the DOM, so that its top is half the difference between its intrinsic height and the current height of the homescreen element above the top of the element, and similarly, its left is half the difference between its width height and the current width of the homescreen element to the left of the element. Essentially, the center of the image will be in the center of the element.

We’ll do this by adjusting the background-position of the element once the page has loaded (as is often the case, this is the most complicated part of the process, even though it’s only peripheral.)

Now we’ve set up our elements, our homescreen background image, and we’ve worked out our algorithm, we’re ready to go.

OK, at this point, we’ll pretend we already know the current rotation of the device (we’ll cover how we get that next). Let’s assume that each time the device changes its orientation we get an event. Which in fact is exactly what happens. We’ll create an event handler for this event. As we’re responding to a change in the orientation, we’ll call this ‘orientationChanged‘. Here’s what this will need to do (again we’ll concentrate on just the rotation around the Y axis of the device to keep things simple)

And here’s that in JavaScript

So, now we are moving the background image left or right depending on the rotation of the device. But how well does this work? Well, you can test it out yourself. Here’s an emulation, which uses CSS 3D transforms, as well as a version you can run directly in a device. What do you think? In the emulated version, you might think the 3D effect is simply coming from the use of CSS 3D, but if you set the distance to zero, and then rotate the device, you’ll see that there is no parallax effect. The greater the distance you set, the more pronounced the effect.

But so far, we’ve not discussed how we actually get this mystical orientation information. As we mentioned briefly we’ll be using the deviceOrientation event widely supported in mobile devices in particular.

Which is all a lot easier to understand with a picture.

Here’s how we’ll use this information

Here’s our event handler, which is almost identical to the code above, just adapted to take the orientation event as its argument.

Ok, so there’s a reason we’ve still only worried about movement left to right. When you look at a screen, the neutral position in terms of rotation around the y axis (that is, tilted to left or right) is clearly with the screen perpendicular to the user’s line of sight. But, what’s the neutral position for the tilt forward and backwards? Lying on its back? Probably not. Perpendicular to the surface of the earth? Also probably not. When you hold a phone or tablet, it’s likely to be somewhere between these two. In fact, right now, you’re holding your device at an angle of

To simplify matters, let’s say that the user will typically hold a device at around 45 degrees. So, we’ll make this our “neutral” position for the parallax effect. Which means, we’ll subtract 45 degrees from the current rotation when calculating the position of the background image up and down.

What’s also interesting is that if we change the orientation of the screen, from landscape to portrait, the beta and gamma values from the orientation event are still relative to the device. So, we need to now take into account whether the screen has been flipped (maybe even upside down) before doing our calculations.

Let’s think about each of these three ‘new’ possible states in turn.

When turned upside down (screenOrientation === 180), we’ll reverse the beta and gamma values, by multiplying them by -1. Effectively, we’re treating up as down, and down as up, left as right, and right as left.

When rotated left, screenOrientation === -90, we’ll swap gamma for beta, and the reverse of beta (-1 * beta) for gamma. Essentially, swapping left and right for forward and back, back for right, and forward for left.

Lastly, when the screen is rotated to the right (screenOrientation === 90), we’ll do the opposite. So we swap left for forward, right for backward, forward for left, and backwards for right.

Then we continue as before, and now regardless of the screen’s orientation, we still have our parallax effect. We’ve actually gone one step further than the real iOS homescreen, at least on the iPhone, as on the iPhone device rotations don’t affect the orientation of the homescreen.

So, very little code really to achieve the effect, particularly after we’ve set up our background image. If you’d like to grab the code, it’s all up on Github. And here’s the finished product if you want to visit it in your tablet or phone of choice. Provided they support DeviceOrientation events, the effect should work. Enjoy!

Browser Support via Can I Use

In school, you most likely did trigonometry and geometry with angles in degrees. Grown up math is typically done in radians, where 2π radians is 360 degrees. Since device orientation gives us rotation in degrees, we covert to radians by multiplying the number of degrees we have by π and then dividing by 180. 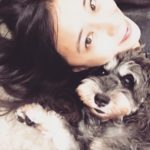